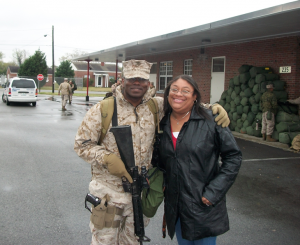 I met my husband in college. He told me that his ambition was to become a Marine. That didn’t surprise me too much because his dad was a Marine at the time (retired after 28 years of service), his mom was a Marine (retired at 20 years of service), so it made sense that he was going to follow in his parents’ footsteps. Eventually, his younger brother also became a Marine. Getting to know his family and from the stories they told, it should’ve occurred to me that my life as a military spouse wouldn’t be the same as the life I was leaving behind. Like I said, not too surprised that he wanted to be a Marine, but I didn’t know EXACTLY what that meant until we got married.

Shortly after we got married and we were stationed in North Carolina, I began to have some issues. The biggest one was that I couldn’t find a job. This was really hard on me because I am a very ambitious person and I was so used to climbing the corporate ladder in Los Angeles. I would work in a company, get promoted to a better position, another company would notice how awesome I was, the new company would hire me, and the cycle would repeat. I couldn’t do that as a military spouse. I realized early on that I would be moving around too frequently (we move every 3 years) to be in a position long enough to get promoted. The second thing I noticed was that employers could tell I was a military spouse and they knew that I wouldn’t be staying around as long as they would like. My resume was a dead giveaway that I was a military spouse because it showed the positions I held in Los Angeles, CA, Beaufort, SC and other places within a 5 year span. This was very frustrating for me. 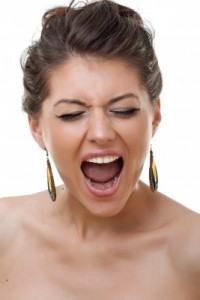 Then one day, I had it! I just blew up. I started yelling, screaming, and crying because career-wise I couldn’t get what I wanted. My dream was to be a top executive at a big company and have my office window overlooking the ocean or some awesome type of view, doing what I loved, and having my own executive assistant. Why couldn’t I have that dream AND the love of my life? It just wasn’t fair! Kudos to my husband who just stared at me with his eyes in shock and just listened to me rant and get my frustration out. He pulled me into a big hug and said, “I’m sorry wife.” I calmed down and we started thinking of how to solve this problem. We came up with a great solution: start my own business. “You’ve always wanted to start your own business,” he pointed out. “If you really want to do this, I’ll support you, and we can make this happen.”

Fast forward, 5 years later and we both couldn’t be much happier with the solution we came up with. We both have careers doing what we love and can be anywhere in the world. What we both didn’t know and have come to love about KR Design is that having my own online business allows me to be more flexible and have more freedom than a job. I can be available for promotions, unit functions, family events, and still get work done. Oh, and my dream to have an office that overlooks the ocean or some type of cool view, doing what I love, and having my own assistant? Currently, my office is in Hawaii (my office window overlooks the mountains), I love what I do (social media and online marketing), and I have own assistant!

Who would’ve thought that KR Design would be born from an afternoon of frustration, crying, and ranting? Yet at the same time, we’re both very happy that it’s come to this. So, what’s your story? How was your business born? Comment below, I would love to hear it!